Thank you for your patience while we retrieve your images.

Tan-awan, in the southern Philippines island of Cebu, used to be a sleepy village that never saw tourists unless they were lost or in transit.
Yet now they flock there by the hundreds - to swim with whale sharks, the world's largest fish.Whale sharks are lured to the Tan-awan coastline of the Oslob district by fishermen who hand feed them small shrimp, drawing divers and snorkelers to see the highly sought-after animals, known as gentle giants of the sea.
But the practice has sparked fierce debate on the internet and among biologists, who decry it as unnatural. 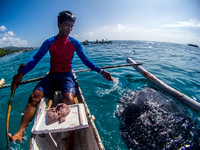