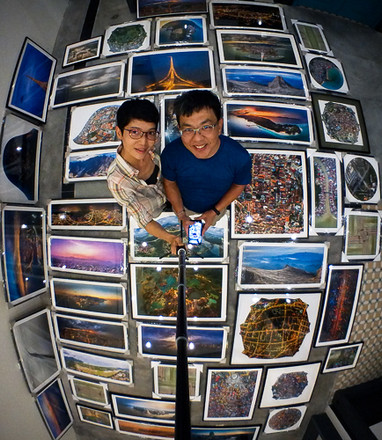 Internationally published award-winning author, photojournalist and aerial landscape artist, David ST Loh has been a paragon of innovation in the media industry for over 30 years, most of which were spent at the distinguished news organization, Reuters Ltd. He has worked as a photojournalist and subsequently as an editor at the award-winning global pictures desk at Reuters. Previously based in Kuala Lumpur, London and Singapore, his images have graced many books and global newspapers. David was also a jury member for the China International Press Photo 2016 competition.

David is famous for creating iconic and captivating images for his clients. Returning to Malaysia after being based in Singapore for over 20 years, David established Elaton Asia Services and Elaton Publishing with his wife, Rebecca Lee.

In July 2019, they published Over Penang, featuring David’s unique and iconic aerial images taken around Penang. The book was awarded the Malaysia National Library Book Award 2020 under the English category. His second book, Simply Penang showcases the vibrancy of Penang through its residents, places, festivals, arts & culture and naturally, its food. Both Over Penang and Simply Penang are now considered the best pictorial books on contemporary Penang.

The talent and skills for producing iconic images, exhibitions and books by the company were recognised overseas, having been invited to Myanmar and Western Australia tourism to produce similar projects as Over Penang.